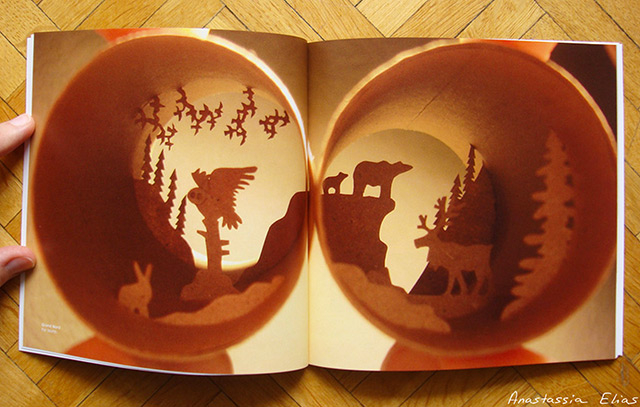 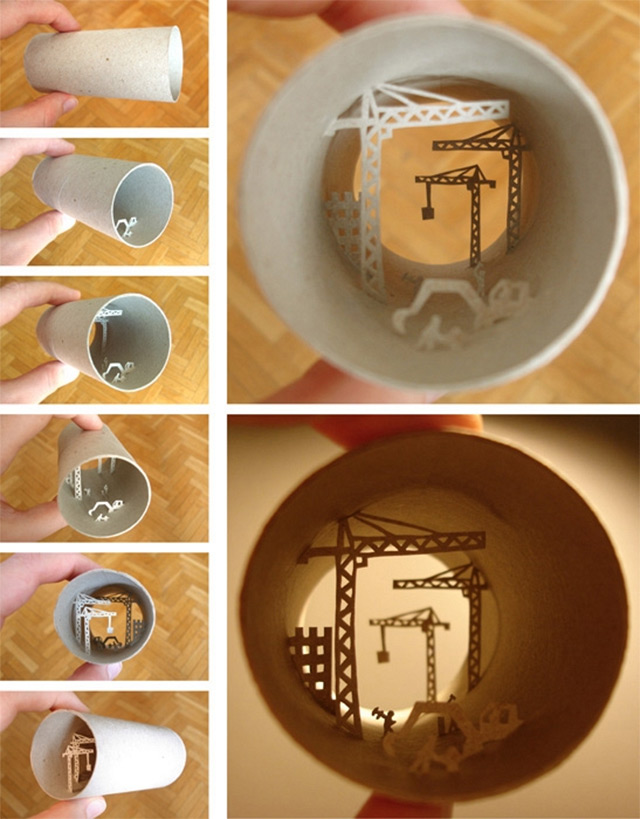 If you’ve visited any art or design blog over the last few years you’ve almost certainly run into the artwork of Anastassia Elias who made waves in 2009/2010 with her wonderful back-lit paper dioramas inside of toilet paper tubes. Today she announced a new book titled Rouleaux containing photos of 67 original works spanning 2009-2012. You can pick it up over on Blurb for about $22. See many more from this series right here. Russian paper artist Yulia Brodskaya (previously) just finished her latest artwork, an intricate portrait of an older woman smoking a pipe using a colorfully explosive palette of quilled paper. Brodskaya lives and works in the UK where she illustrates with paper for dozens of the world’s largest brands and publications. See much more here.

Everything is Incredible: A Man Ravaged by Polio Spends his Life Building a Helicopter from Trash

I honestly have no idea where or when I first saw this film, but it’s stuck with me for over a year, and unable to find it again after searching the past few days I turned to Jason Sondi over at Vimeo. Armed with my vague description, and despite never having seen it himself, he found it in about 10 seconds.

Everything is Incredible is a short documentary by Tyler Bastian, Trevor Hill and Tim Skousen about a man named Agustín from Siguatepeque, Honduras who was struck with polio at a young age. His body ravaged from disease, he was left unable to walk and spent most of his life working as a shoemaker in what is described as near-poverty. Possibly plagued by childhood dreams of flight, in 1958 he embarked on his life’s work: the construction of a crude, custom-designed helicopter made completely from trash with the exception of a few pieces of rebar purchased from a hardware store. Even the chains he uses to power the propeller were forged by hand. The filmmakers do a wonderful job interviewing local residents and family for their reactions that vary from hope to despair. I find this video to be both very beautiful and very sad as it discusses what is gained and what is sacrificed through the act of devotion and creation, yet I’m left feeling a profound sense of love for Agustín, which is perhaps why it’s stuck with me for so long. Definitely worth 10 minutes of your time. Thanks Jason.

Also, if you liked this, check out the exceedingly bizarre Welcome to Planet Earth: The UFO Welcome Center.

Update: In response to recent attention the filmmakers have launched an Indiegogo campaign to raise enough funds help Agustín with living expenses by purchasing the helicopter and his home. He will of course retain both through the end of his life, but with the funds raised from the campaign the helicopter itself would be preserved in his memory. Go donate, I did.

Artist Lorenzo Durán lives and works in Guadalajara, Spain where for the last four years he’s focused primarily on cutting intricate illustrations from dried leaves. He often depicts animals and insects as shown above, but has explored a wide variety of geometric patterns and also does custom work on request. (via fer1972)

One Boy, a DIY Arcade, and the Most Uplifting Flashmob of All Time

This is the story of a nine year old boy named Caine who built an elaborate cardboard arcade inside his father’s used auto part store. A dollar gets you four plays, and two dollars gets you a five-hundred turn FUN PASS. Business was slow until independent filmmaker Nirvan Mullick spotted the arcade and plotted to change Caine’s life forever. Watch the short film and if you feel as weepy and joyous as I did, head over to his newly established scholarship fund. And can I just say, what an amazing dad to support, encourage, and allow his son to pretty much overtake his storefront for the sake of fun and creativity. (via mefi)