The coastal town of Helensburgh is located in one of the wettest regions of Scotland, averaging more than 190 days and 63 inches of rainfall each year, and it’s also the site of an architectural masterpiece by famed designer Charles Rennie Mackintosh. Built in 1904, “Hill House” is a modern construction with a focus on light and texture, and its facade is made of gray Portland cement rather than a more traditional and hardier substance like lime.

While the material was innovative at the time, it hasn’t endured the wet conditions of its surroundings and has started to deteriorate and crumble as it soaks up moisture from the air and ground—the National Trust of Scotland, which manages the home, describes it as “dissolving like an aspirin in a glass of water.” To dry out the facade and hopefully preserve it for generations to come, the trust commissioned a giant, greenhouse-like box to sit over top.

English YouTuber and educator Tom Scott visits the porous covering, which at 32.4 million steel rings is the largest sheet of chainmail in the world, in a short documentary that reveals how the uniquely designed mesh structure has become a landmark of sustainability and innovative conservation in its own right. He discusses the unusual reasons for a permeable wall, the ways the chainmail offers the proper amount of ventilation without sacrificing protection, and how the multi-story walkways allow for otherwise impossible views of the “Hill House” roof and upper floors. Join Scott on his tour above to see the enclosure up-close, and in case you missed it, make sure to watch his trip to this mountain of mannequins. 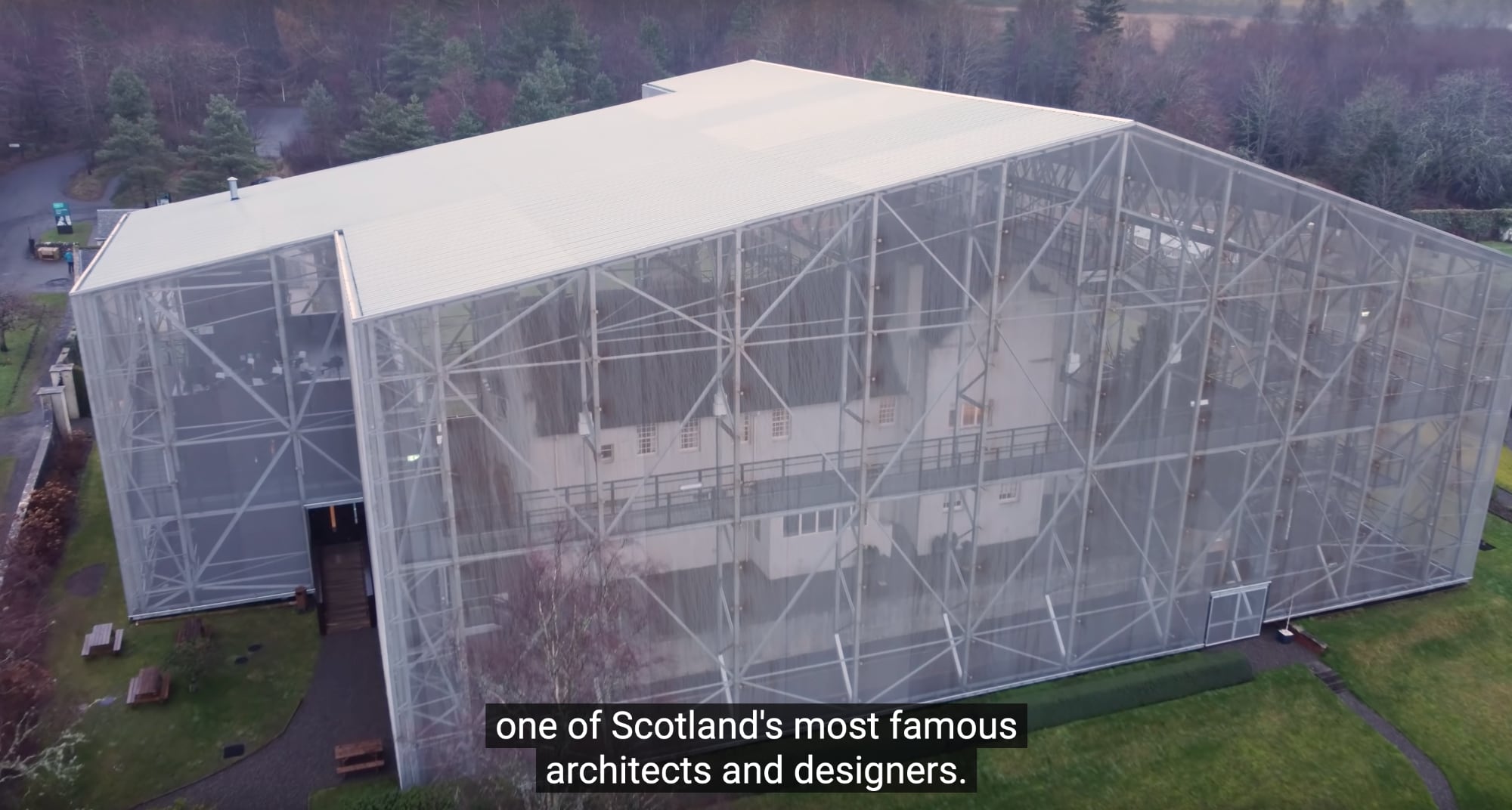 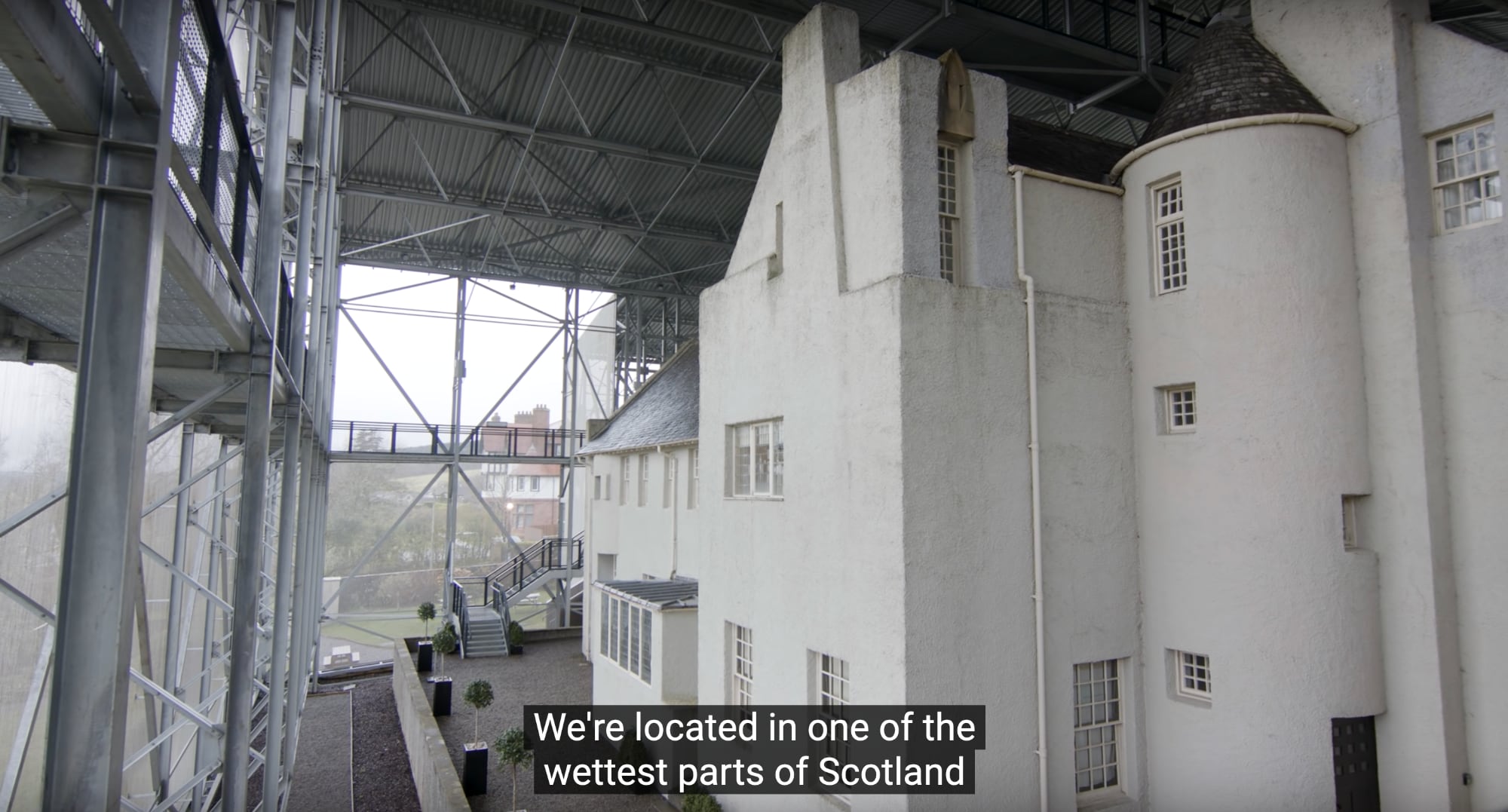 Wander Through a Mountain of 25,000 Mannequins in an Astounding Look at Consumerism and Waste

In a wooded area of Lincolnshire, it’s not unusual for people to partake in what’s dubbed a “drive through body part heist.” The preposterously named activity involves a trip to Mannakin—a Midlands mannequin distributor frequented by a wide array of clientele like merchandisers, film crews, and Halloween devotees—where visitors spend 15 minutes scouring its meters-high pile of discarded forms for, none other than, body parts. These challenges to fill a car with as many pieces as possible are just one part of the company’s business model, which involves saving the used fiberglass displays from landfills and returning them to the retail ecosystem.

English YouTuber and educator Tom Scott walks through the staggering heap in a recent video and talks with director Roz Edwards, who’s amassed about 25,000 figures from locations all over Europe that are now scattered across the property. The short documentary project dives into the company’s process for revitalizing worn arms, legs, and torsos and confronts the strange, surreal environment created when thousands of lifeless bodies occupy a single space in what’s ultimately a striking visual indictment of consumerism and our collective approach to waste.

You also might find this short documentary set in a mannequin factory interesting. 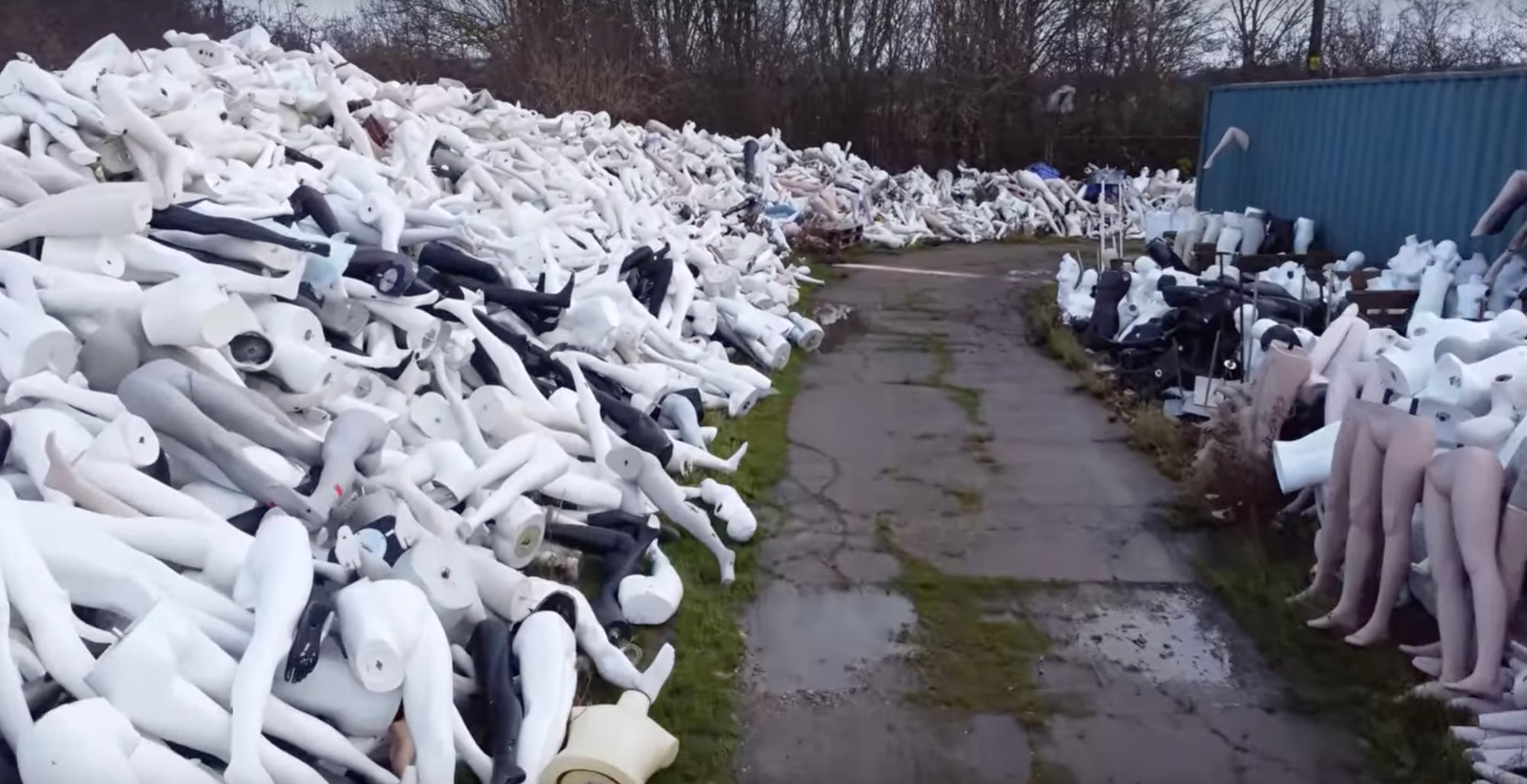 Paper & Glue: A New Documentary Follows JR Through Some of His Most Iconic Projects

A new feature-length documentary goes behind the scenes with French artist JR to capture some of his most significant projects to date, including his poignant photographic work of a child peering over the U.S./Mexico border wall and pair of installations at a maximum-security prison in Tehachapi, California. Paper & Glue follows the renowned artist through the evolution of his practice from early graffiti days to his current undertakings—his anamorphic work at Florence’s Palazzo Strozzi earlier this year and his illusory transformation of the Louvre courtyard in 2019 are both evidence of his growth—that are increasingly massive in scope and impact and often shine a light on humanitarian issues.

“The film is the culmination of years of my work and includes an archive of photography and videos that span back to my adolescence. At the time of many of these recordings, I had no intention or awareness they could be used in this way,” JR says. “I hope this film further uplifts the essentiality of art and the potential it holds to reshape even our most ingrained beliefs.“

Paper & Glue is currently in theaters around the U.S. and premieres on December 10 on MSNBC. Regardless of its unabashed tech culture, San Francisco remains a hub for analog artforms, hosting an annual festival that uses a 7-ton steamroller to print linocuts and housing one of the last remaining publishers of its kind. Arion Press is dedicated to the age-old practice of bookmaking, and with a small team of type casters, proofreaders, printers, and binders, painstakingly produces artist publications entirely by hand.

An episode of Raw Craft, a film series produced by The Balvenie distillery, visits the publisher with the late Anthony Bourdain as host. For three seasons, the beloved chef, writer, and travel icon toured the U.S. visiting tailors, metal casters, saxophone designers, and myriad crafters devoted to traditional techniques. On his stop at Arion Press, Bourdain explores all steps of the bookmaking process, from using 19th Century technology to print each letter with metal type, proofing the text by reading out loud, and stitching each page by hand.

Dive into the publisher’s process in the episode above, check out some of its latest projects on Instagram, and browse publications, notebooks, cards, and other goods in its shop. You also might enjoy this film chronicling the last day of hot metal typesetting at The New York Times. Each winter in Ely, Minnesota, a crew treks out onto a frozen lake to cut hefty blocks of ice from its surface. They haul the thick chunks to storage, where they’re stacked, covered in sawdust, and preserved for use the rest of the year, a once-necessary method of refrigeration rarely applied today. Consisting of dozens of people, some who have been dedicated to the cause for decades and others who joined in the last year or two, the team engages in the age-old practice of harvesting the frozen blocks at the property of legendary explorer and preservationist Will Steger.

Produced by Gravity Films and directed by Nathaniel Schmidt, “Ice Ball” follows the crew throughout two seasons as they endure below freezing temperatures, a typical condition for Minnesota winters that made filming extra challenging, at the explorer’s sustainable enclave in the North Woods. The short documentary spotlights the community that’s gathered around Steger since his Arctic expeditions and chronicles their devotion to more sustainable ways of living.

As the disastrous effects of the climate crisis accelerate, historic methods like the ice harvest reduce the reliance on carbon-based energy sources and offer an urgent alternative. “All of the ice shelves that I’ve traveled on in the polar regions, north and south, they’re not there anymore. We’re at this crisis now, the human race and the planet. We’re going to have to innovate out of it, and this is what it’s about,” Steger says.

According to Short of the Week, Schmidt is currently working on a feature-length documentary about the life of a Wiradjuri woman. It’s slated for release next August, and in the meantime, you can find more of his work on Vimeo.