For over a year I’ve been stalking the website of book and paper artist Ryuta Iida hoping to share new work with you and today I finally have something to show for it. As part of an ongoing collaboration with artist Yoshihisa Tanaka called Nerhol the duo are showing 27 new works at limArt this month including these astounding new portraits that are part of a series called Misunderstanding Focus. At first glance it looks as though a photograph has been printed numerous times, layered and cut into a sort of sculptural topography, which would indeed be amazing enough, but Nerhol took things a bit further. The numerous portraits are actually different, photographed over a period of three minutes as the subject tried to sit motionless, the idea being that it’s impossible to ever truly be still as our center of gravity shifts and our muscles are tense. The portraits are actually a layered lime-lapse representing several minutes in the subjects life and then cut like an onion to show slices of time, similar to the trunk of a tree. What a brilliant idea. If you’ve never seen Iida’s cut paper books, definitely head over to Nerhol to see them up close. A huge thanks to my friend Johnny at Spoon & Tamago for helping me translate some of this! 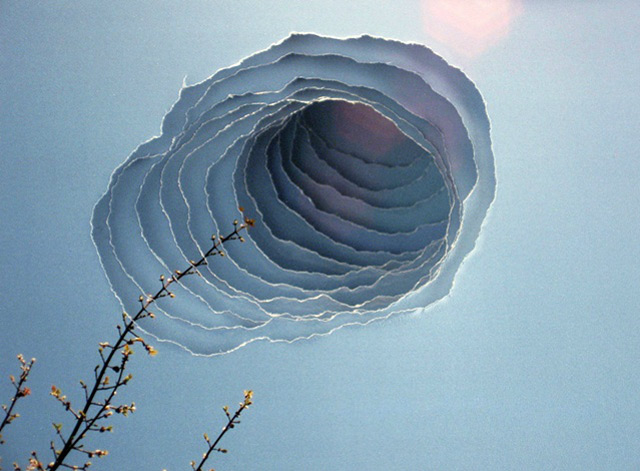 Love Is Making Its Way Back Home: A Stop Motion Animation Using 12,000 Sheets of Construction Paper

This great new video for Josh Ritter’s Love Is Making Its Way Back Home was directed by Erez Horovitz and involves the meticulous animation of over 12,000 laser-cut pieces of construction paper. Via Etsy:

A team of nearly twenty artists, editors, directors and product assistants ushered the video into being. The group started with storyboarding and computer animation before converting the digital graphics to paper cutouts (frame by frame), photographing those 12,000 cutouts and then stitching them together into four minutes of paper animation.

You can learn more about how it was done and see some great behind the scenes shots on Josh Ritter’s blog. (via etsy) Using carefully cut fragments of printed skin from the photographs of celebrities in popular magazines, artist David Adey creates elaborate, pinned collages reminiscent of the most complex entomological displays. In some instances he reconstructs the original photos using component pieces cut into myriad geometric shapes and symbols, each placed perfectly on the canvas with a single pin. Other times he creates giant whirling textures as with his piece Swarm, a process that can take up to 200-300 hours. The patience required for all of this simply boggles the mind. Adey currently has a solo show at the University of Nevada, Las Vegas. (via lustik)