When you first begin watching this clip from Japan’s Kamiwaza 2013 talent show, you’ll notice a fair amount of dramatic lighting, deep breathing, and plenty of showmanship from Swiss performer Mädir Eugster of the Rigolo Swiss Nouveau Cirque. He carefully rests the feather on a small tree branch and then grabs another slightly larger stick and another and another. Fast forward ten minutes and the act miraculously continues, sweat pouring from the top of Eugster’s head down his bare back until a series of 14 enormous sticks zig zags from the performer’s lifted arm like a massive wooden Calder mobile…. Pratt student Melanie Hoff connected cables carrying 15,000 volts of electricity to a large plank of wood and then documented the results. Surprisingly the areas around each contact point don’t simply catch on fire or burn in a circle, but rather traverse outward in a fractal-like pattern, like lighting in slow motion. Watch it all unfold above. (via colossal submissions)…

South Korean artist Wang Zi Won constructs intricate mechanical figures of Buddha and bodhisattva that appear to be lost in meditation or enlightenment. The electrically-powered figures are fused with numerous mechanical components which at times resemble halos or lotus flowers and simultaneously move the humanoid figures through repetitive motions (see videos above). The artist says his intention is to examine a future where humans and technology merge, something he views in a particularly positive light. Via Shin Seung-ho of Dukwon Gallery: The artist predicts that in the future humans will evolve and adapt themselves to enhanced science and technology just… Take a few steps back or perhaps just squint your eyes and these images by artist Yao Lu might resemble traditional Chinese landscape paintings of cliffs, waterfalls, and mountains. Look a bit closer and your perspective may change. Lu digitally assembles each of her images using photographs of landfills and other aspects of urbanization draped in green mesh to mimic idyllic scenery. Similar to the recent work of Yang Yongliang featured on this blog just last week, Lu seems to be making a thinly-veiled commentary on the encroaching ecological threat of urbanization. See much more over at Bruce Silverstein Gallery…. Artist Vik Muniz (previously here and here) has three new works made from gold scrap metal that will be on view as digital prints at the Armory Show in New York starting March 7th, 2013 through Rena Bransten Gallery. Muniz is known for creating images using multitudes of discarded objects and trash, and you may have seen his work in the 2010 documentary Waste Land. Side note: for the first time ever the Armory Show has partnered with Artsy to offer a gorgeous full-blown preview of the fair featuring hundreds of works in beautiful high-definition. For those of us who… 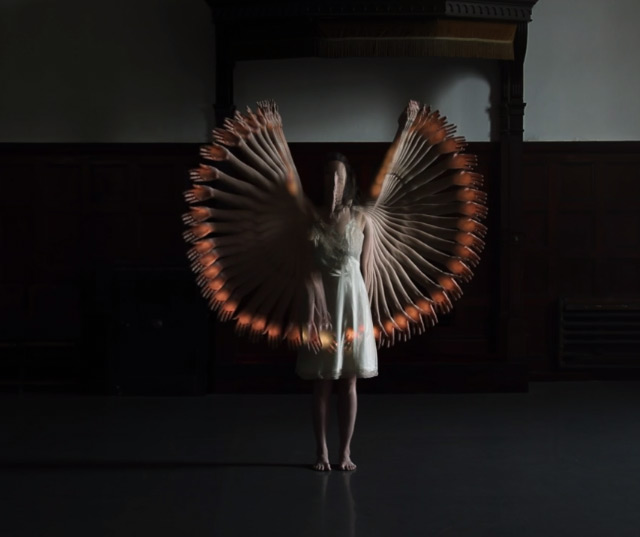 Released three weeks ago after a year on tour at various film festivals, Choros is the latest experimental art film from director Michael Langan that explores the movement of the human body, specifically the motion of dancer Terah Maher. Choros follows in the steps of Eadweard Muybridge, Etienne-Jules Marey, and Norman McLaren, all of whom spent years studying the physical moment of animals and humans through film. Langan takes the next step using new digital innovations to layer some 32 sequential instances of a single movement and then stretch it out over time. Set to Steve Reich’s Music for 18…